Andalusia and the Mediterranean Coast with Barcelona Tour 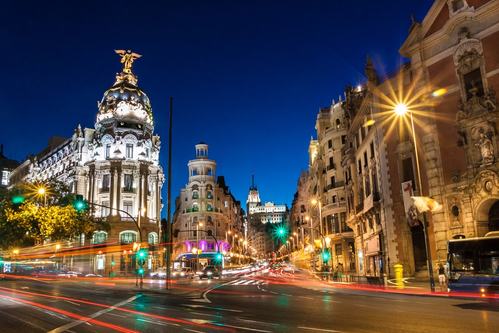 1st day (Monday). MADRID - CÓRDOBA - SEVILLA
Departure from our Julia Travel terminal (Pl. de Oriente parking level -2) at 8.30 a.m. to La Mancha, the land of Don Quixote. Transport to Córdoba by way of the natural pass of Despeñaperros. Visit to the impressive Mosque/Cathedral and stroll through the narrow streets of the Jewish quarter.
In the afternoon, the trip continues to Sevilla. Arrival, dinner, and accommodation at the hotel.

2nd day (Tuesday). SEVILLA
Breakfast at the hotel. In the morning, a tour of the city’s monuments and most scenic sites: the exterior of the Cathedral, the second largest Catholic cathedral after Saint Peter’s in Rome; the Barrio de Santa Cruz, the natural setting of Carmen and Don Juan; Maria Luisa Park and the Plaza de España. Afternoon free to discover the different perspectives and flavours of this magical city.
Dinner and accommodation at the hotel.
Optional flamenco show.

3rd day (Wednesday). SEVILLA - GRANADA
Breakfast at the hotel and departure to follow the Route of the Caliphate towards the heart of Andalucía with its landscape of endless olive trees. Arrival in Granada, home of the incredible Nasrid dynasty. Visit to the famous Alhambra and the Generalife Gardens. This is a setting which inspired authors such as W. Irving in his work Tales of the Alhambra.
Dinner and accommodation at the hotel. In the evening, optional flamenco show in the Sacromonte neighbourhood.

4th day (Thursday). GRANADA - VALENCIA
Breakfast at the hotel. Departure to Valencia via Murcia, a major city on the Segura River, and via Alicante, the second largest city in the region of Valencia. Arrival in Valencia, the birthplace of paella and home to the modern City of Arts and Sciences.
Accommodation at the hotel.

5th day (Friday). VALENCIA - BARCELONA
In the morning, a visit to the historic quarter, the Turia River and the most cutting-edge architectural complex: the City of Arts and Sciences. In the afternoon, departure towards Catalonia and Tarragona, the ancient Roman city of Tarraco. Arrival in Barcelona, a major Mediterranean city and the birthplace of Antoni Gaudí, the leading figure in Catalan modernism.
Accommodation at the hotel.

6th day (Saturday). BARCELONA
Breakfast at the hotel. In the morning, a tour of the city known worldwide as the host of the 1992 Olympics, visiting the main modernist avenues and the city’s most iconic sites: Casa Milá, La Pedrera, Casa Batlló, Montjuic Park, the Olympic Ring, Columbus Monument, and the Barrio Gótico.
Afternoon free.
Accommodation at the hotel.

7th day (Sunday). BARCELONA - ZARAGOZA - MADRID
Breakfast at the hotel. Departure to Zaragoza. Arrival in the capital of Aragón, located on the banks of the Ebro River and known for the pivotal role it played for Augustus Caesar in the Roman period. Free time to visit the impressive architecture of the Basilica of Nuestra Señora del Pilar.
Trip continues to Madrid. End of service.